It all started in the summer of 2008. In July of that year, Apple launched the App Store. It only took three months for Google to follow suit by launching the Google Play Store. Apps became a gateway, a destination, a place where users can consume content, purchase goods (digital or physical), subscribe to niche content, and of course – play games. 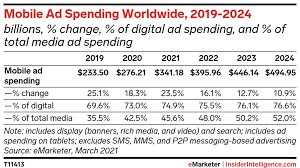 Mobile and App marketing exploded faster than any other medium in history. Mobile ad spend outgrew web already in 2016. It took only two years for mobile as a medium to surpass TV Campaigns spend.

It’s no surprise that mobile was attractive both to disruptive companies, as well as the legacy brands. As smartphones were widely available – these magical devices were mobile, personal, and capable. Smartphones became digital identity devices.

A New Set of Skills required by Mobile Marketing

We have developed the attention span of a goldfish. With all these factors included, plus a few more isosteric ones (battery, connectivity, the social element of mobile apps, and more) advertising across the mobile industry provides endless challenges, alongside endless opportunities.

We, marketing experts like to talk about Mad Men as an analogy to when marketers relied mainly on ad creative as a means to advertise a product. During the past few years, it was as if creatives lost their importance in the marketing process. As advertisers were led to believe that it was the metrics that mattered most: CPI, LTV, CAC, CPA. Creatives took a back seat as marketers relied on attribution reports showing them that this or that single click was 100% responsible for generating a loyal customer for life.

This was an overly simplistic approach to marketing, but marketers blindly followed these data points, as they were simple to grasp and more than often – were aligned to what marketers wanted to see. Even data points showing that over 25% of mobile ad spend was wasted on fraud wasn’t enough for marketers to give up this notion. It took the deprecation of user-level tracking to “help” marketers realize that creatives matter.

Creatives and Data Science as a winning combination

Now that user-level data is not available, marketers prioritized creatives once more. A good creative can be detrimental to marketing performance. Especially when measuring the direct impact of ad spend over sales becomes impossible via attribution. Marketing measurement using data science models replaced the simplified dichotomy of last-touch-attribution.

Marketers realized (or were forced to realize) that using last-touch attribution to make marketing decisions was like operating a football team where you would only pay or give credit to the person scoring the goal.