Elections in Europe: How do political parties invest in Facebook ads

Over the past years, Facebook has exploded as a site for political advertising and election campaigning. Despite the increasing prominence of Facebook, we currently know very little about how many political parties actually spend on the platform before the elections in Europe. Even though the recent political campaigns have relied on social media messaging like no election previously. Most of the larger parties push their messages across a variety of platforms.

Official statistics usually show only the summary of spending. Therefore offering little insight into how Facebook is really being used by political parties. In this article, we focus on Facebook ads which seem to be the most used and successful among the major political parties. And compare their spendings & reach in Germany, France, and the UK. The figures are publicly available on Facebook’s ads library.

So let’s compare country by country!

The next German federal election for the 20th Bundestag is expected to be held between August and October 2021. The Parties nominate their main candidates for the election now. And start to be more and more active on social media too. On this occasion, we have analyzed the performance and recent social media activities of the 5 major representing Parties from the current Bundestag via Facebook ads. 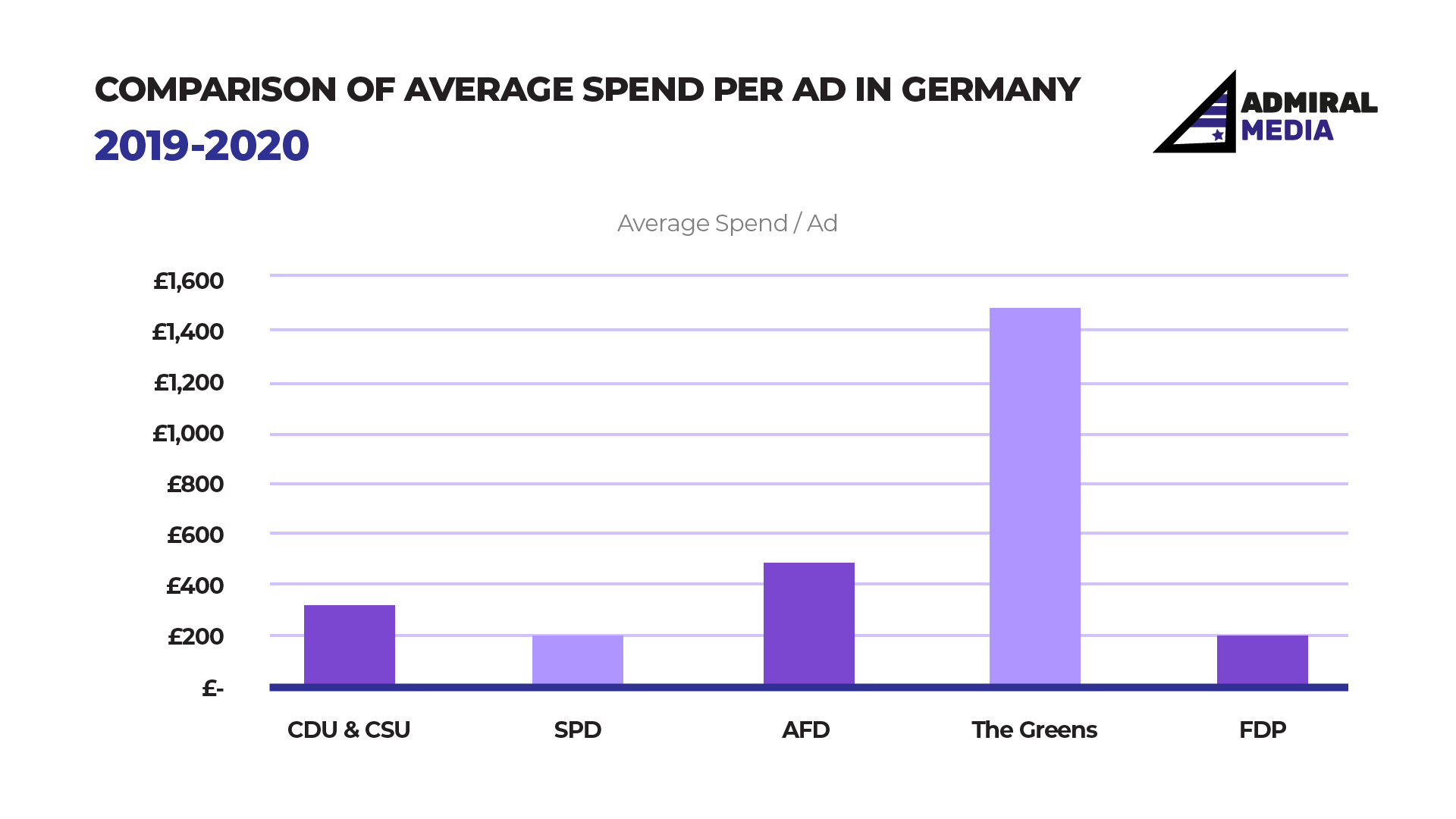 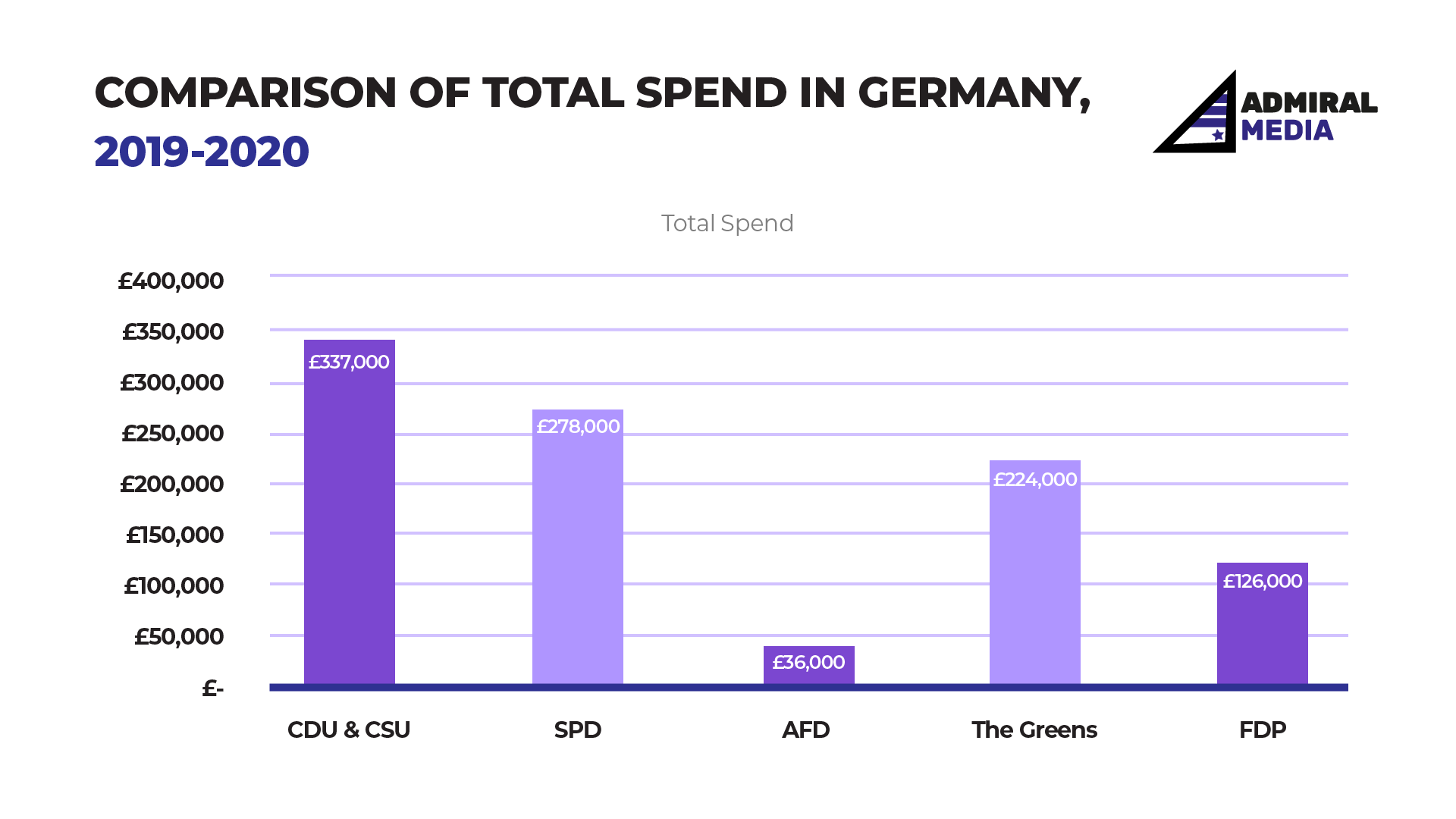 Total spent by CDU & CSU on ads about social issues, elections, or politics between Mar 28, 2019 – Oct 18, 2020, in Germany: 337K EUR. They invest in both nationwide and regional ads. In nationwide ads, the core message is about the main candidates per major regions. In the case of regional ads, the focus is on the local party and their representatives.

Total spent by SPD on ads about social issues, elections, or politics between Mar 28, 2019 – Oct 18, 2020, in Germany: 278K EUR. Recently no nationwide ads. They communicate only via regional ads about local social matters only. Investments, improvements and plans for the given region.

Total spent by AFD on ads about social issues, elections, or politics between Mar 28, 2019 – Oct 18, 2020, in Germany: 36K EUR. We could find only nationwide ads from this period. Mainly about the election to the European Parliament that was held between 23 and 26 May 2019 and matters related to EU politics.

The total spent by FDP on ads about social issues, elections, or politics, during Mar 28, 2019 – Oct 26, 2020, in Germany: 126K EUR. Recently spent on ads, during the last 7 days, Oct 20 – Oct 26, 2020, in Germany: 544 EUR. Their communication focuses on up-to-date topics and important social matters. They showcase much less self-promoting political messages compared with the other parties.

After reviewing the activity of these parties it seems that running Facebook advertising in the run-up to an election is one of the most basic of campaign tactics. But it often still gets wrong. We could say that an ideal combination of any Facebook communication should apply a mix of nationwide and regional campaigns. With recognizable corporate identity. But in reality, the numbers show that with less investment and wisely chosen creatives or messages parties can reach more people. Building on that, it’s also worth taking into account targeting:

In terms of branding, we can say that only CDU & CSU and FDP own a recognizable corporate identity,  their ads are the only ones following the same patterns and look & feel. For the rest of the parties, every single ad seems to follow an ad hoc design with no defined guidelines besides the party’s logotype.

In terms of reach, the difference is significant. The parties who are investing more in single ads (The Greens and ADF) are able to reach 1M-2M people. While CDU & CSU, the party with the highest number of total spend investing much less on single ads. But overall in bigger volume, resulting in a very low reach. 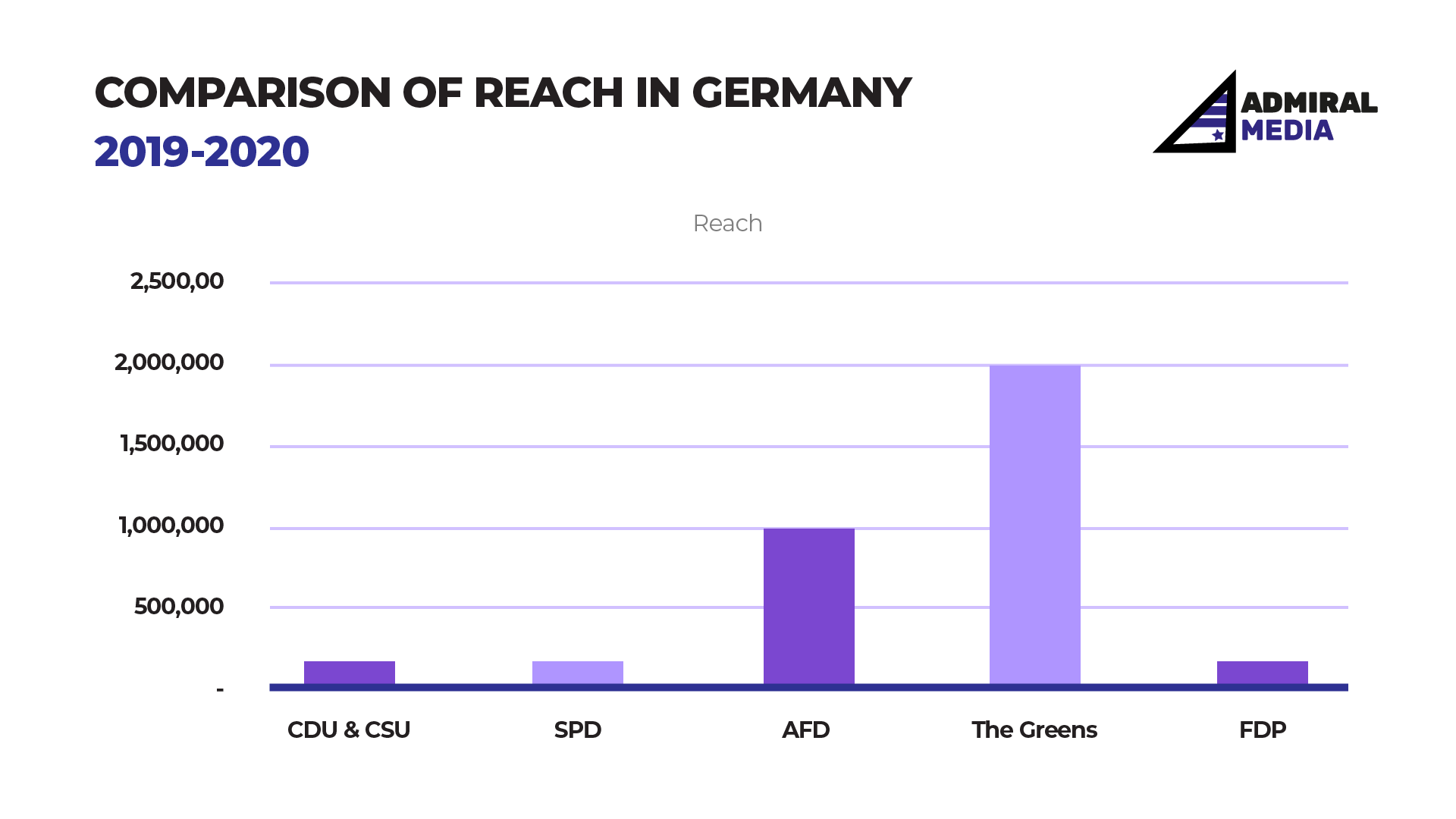 In the case of France, the next election will happen one year later. The first round of the 2022 French presidential election will be held between 8 and 23 April 2022. The second round is held two weeks after the first. La République En Marche! (LREM) won the 2017 presidential election and whose term lasts until 13 May 2022. Out of curiosity, we have also analysed their and other four major parties’ current performance too.

Total spent by En Marche on ads about social issues, elections, or politics, between Mar 28, 2019 – Oct 18, 2020, in France: 5K EUR. Their current communication focuses only on ecological transition, education, gender equality, health & culture. Their average spends on an ad is between 200-299 EUR with 35K-40K average impressions.

We can see that only REM and PCF are using social media at the moment and only for nationwide communication around educational and cultural matters. Also if we review the total spend for the period of 2019-2020 in France, REM is the absolute winner. 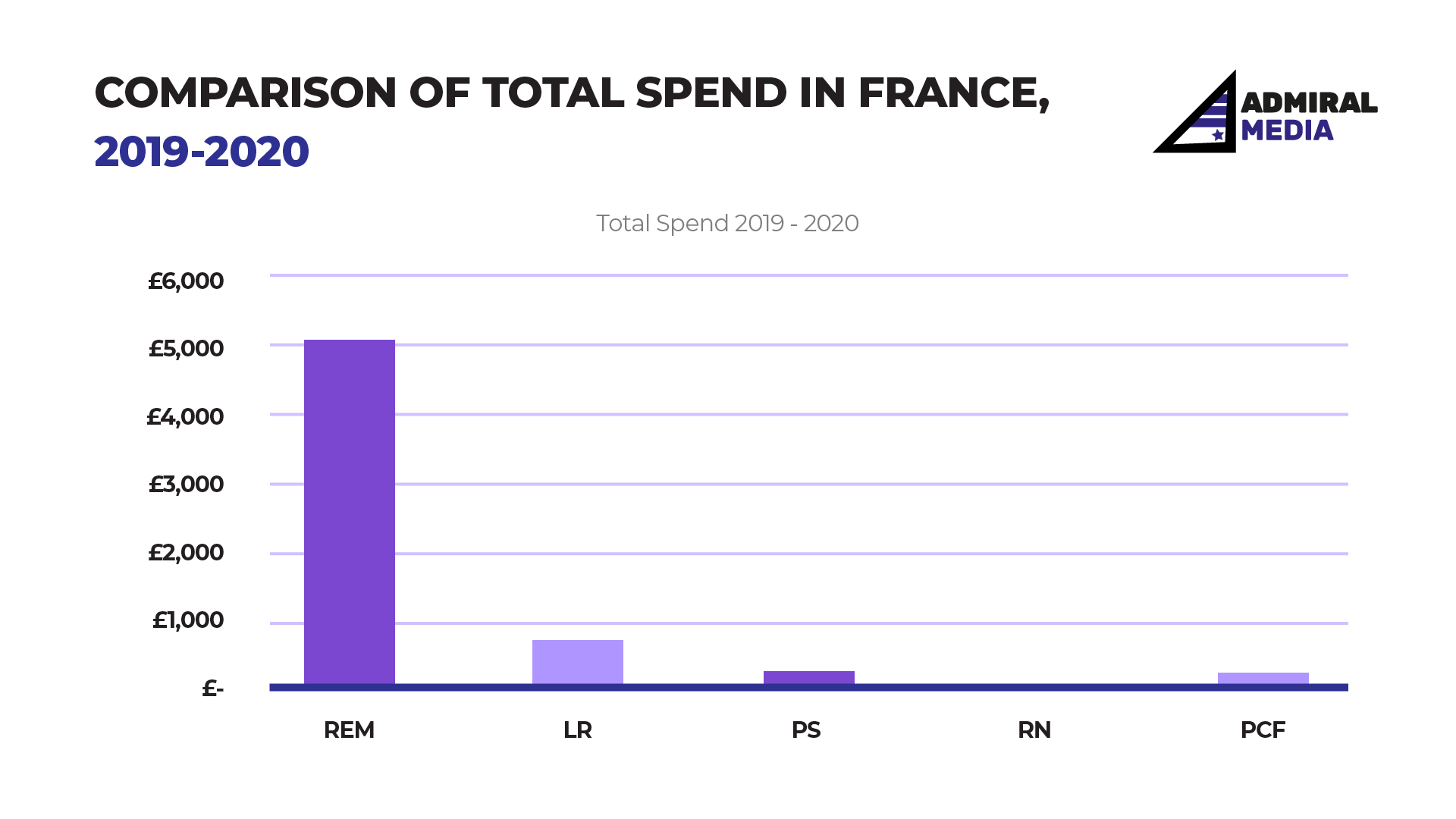 The next United Kingdom general election is scheduled to be held on Thursday 2 May 2024. Provisionally, the next general election will be conducted using the same electoral system as the 2019 election. Out of the current situation in the House of Commons we have analyzed the paid ad performance of the following five parties:

Recently there has been no big investment by any of the parties, but if we analyze the last 24 months spendings, we can see that 3 parties (Conservatives, The Labour Party & Liberal Democrats) were almost equally using social media for their 2019 election campaigns, while SNP’s & DUP’s spendings were negligible. 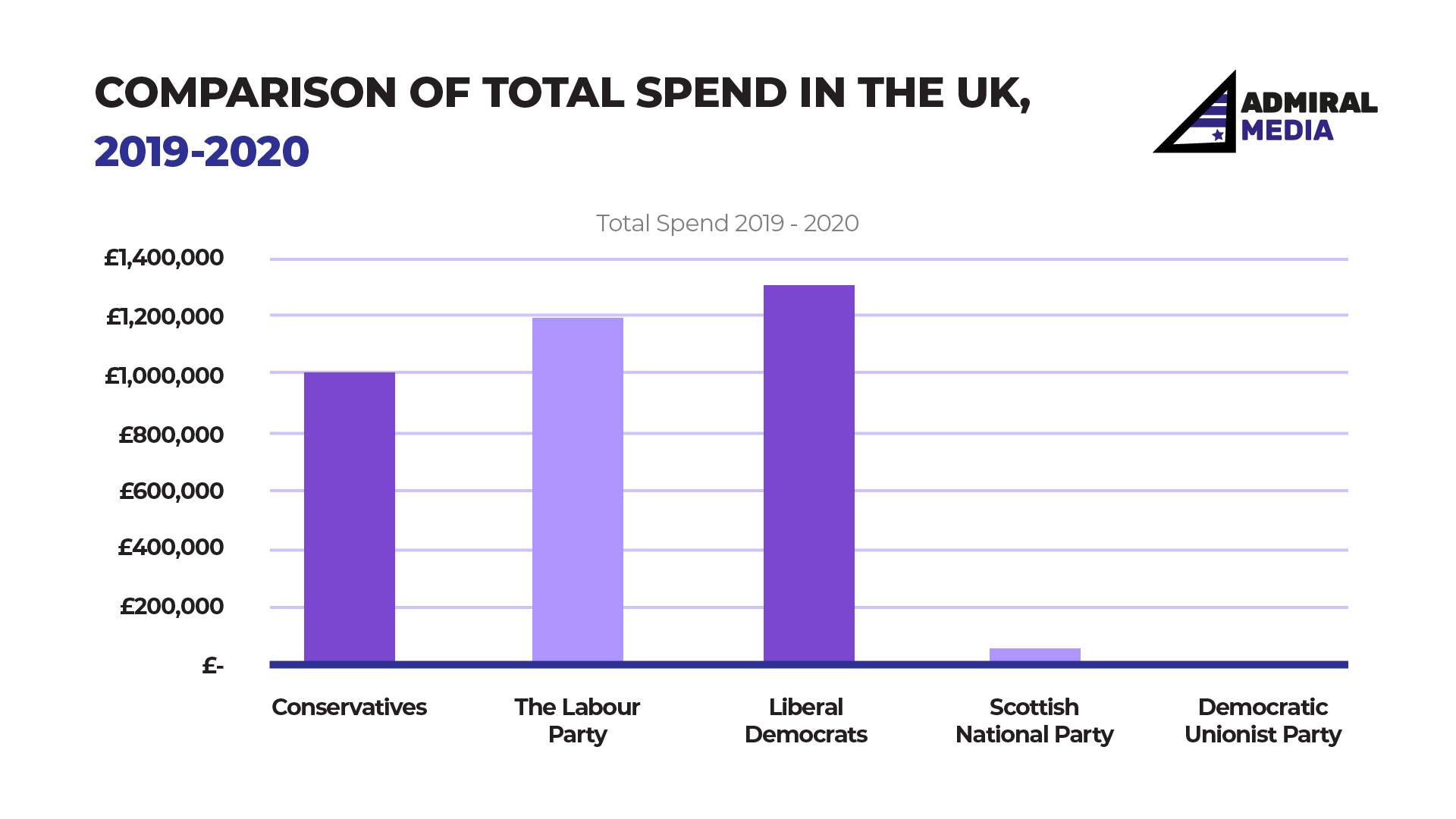 Total spent by the Liberal Democrats on ads about social issues, elections, or politics between Oct 15, 2018 – Oct 18, 2020, in the United Kingdom: 1,3M GBP Recently no spent on paid ads. Their latest communication was about online political conferences.

Total spent by Scottish National Party on ads about social issues, elections, or politics between Oct 15, 2018 – Oct 18, 2020, in the United Kingdom: 38K GBP. Recently no spending on paid ads, the latest ads we could find are from 2019, related to the election.

Total spend by DUP on ads about social issues, elections, or politics between Oct 15, 2018 – Oct 18, 2020, in the United Kingdom: 6K GBP. Recently no spending on paid ads, the latest ads we could find are from 2019, related to the election.

Net-net we can say that the same amount spent on Facebook ads by any two parties can result in very different campaigns. This is because Facebook operates on auction principles. Adverts do not have a fixed price but change according to which audience an advertiser wants to reach, and the nature of the content produced. Content that gets watched and shared by people becomes cheaper, whereas parties with less engaging material see the price increase. It creates an uneven playing field for the parties, effectively pricing some out of using this tool in the way they want.

After reviewing the Facebook ad campaigns of the above parties from three different European countries, we can say that the parties are still willing to invest more & more on Facebook, but only before their election period, or since the general election is called. Especially in the peak of the election period they catch fire, while after the election they rarely communicate, or react only on major social issues, or local, area-specific challenges via regional campaigns.

So we can say that the main reason for running a Facebook ad campaign is simply to get their campaign message out to their voters. Facebook is still the best strategy for engaging their online community because it has the greatest reach among potential voters and it can be targeted very specifically by voter locations, demographics and interests. Not to mention that it is really easy to use and, once they are set up they can push out ads very quickly in response to changing campaign issues.

Get in touch with Admiral Media!