This article will answer the question of how to access Facebook granular data for Android through Google Install Referrer API.

Facebook announced, starting from October 29, 2021, user-level attribution data (raw data) of users who install an app through a Facebook ad after this date will be restricted as a result of Facebook depreciating its Advanced Mobile Measurement (AMM) program.

This means that advertisers who signed for the AMM program won’t have access to such data anymore. But Facebook makes it available to MMPs. However, Facebook is quickly reacting with an interesting workaround. By allowing advertisers to get device-level conversion data on Android using the Google Install Referrer which will unlock many of the same use cases for advertisers.

Google Install Referrer is an Android unique tracking identifier. It’s a string that’s sent to the Play Store when a user clicks on an ad. And it includes important attribution information. This is a fundamental difference in attribution between Android vs. iOS (there is no such Referrer on iOS). And it can help advertisers overcome the deprecation of Facebook’s AMM program. 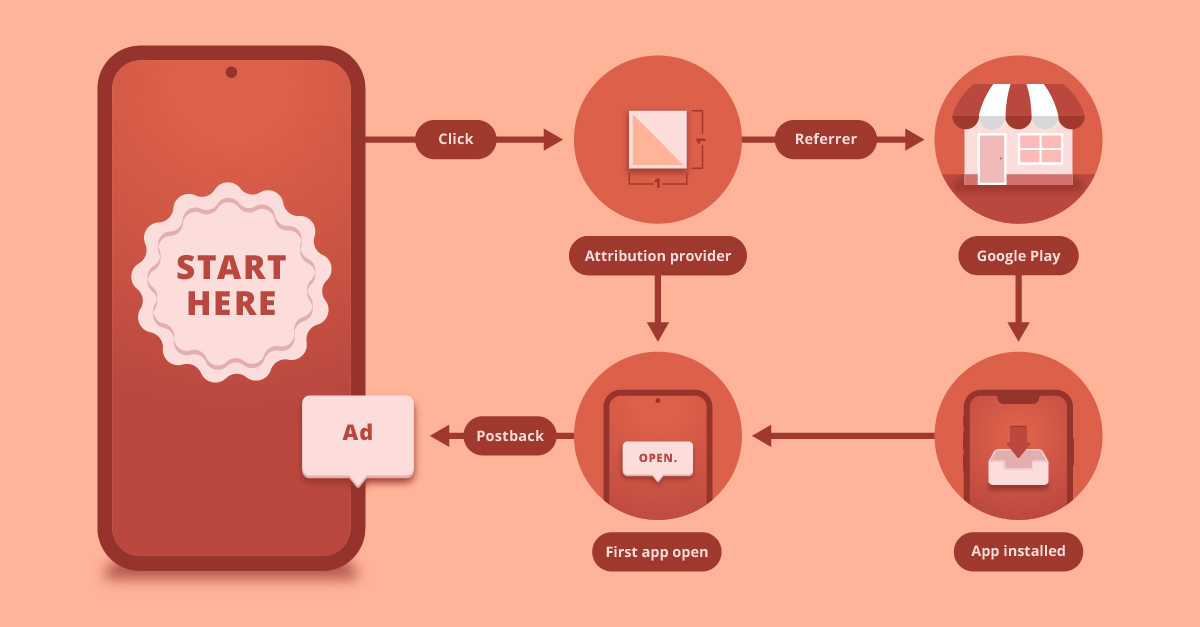 Let’s dive deep into why Facebook depreciates its Advanced Mobile Measurement (AMM) program? How will this impact businesses? What’s the solution? What is the Google Install Referrer? How to prepare your app for it?

AMM program is an agreement advertiser could make with Facebook to get access to user-level as well as granular level data related to their advertising accounts, such as view-through and click-through conversion data.

Later in 2021, Apple rolled out iOS 14 and rendered Facebook Ads to be not so efficient, which changed the advertising ecosystem for good. Well, not very good because it turned out that Apple Search Ads – an advertising platform competing with Facebook Ads – is benefitting directly from these changes and is expected to increase its revenue from $5B to $20B within the next 3 years.

How will this impact businesses?

The change is simply limiting the advertiser’s ability to access user-level data, but aggregate data is still accessible and Facebook will share it directly with MMPs. Later, you can export that raw data, but the change will be in how much data you get and how deep or granular the data is.

Also, this applies to both iOS and Android user-level data regardless of their consent to App Tracking Transparency (ATT) or ad personalization and all MMPs will be impacted by the change with no exceptions.

This means small businesses need to find a different way to validate new features and get insights from aggregated data to enhance user experience or find growth opportunities. In addition to that, if you’re using user-level data in your reporting, you will run into some issues, and you will definitely need to audit your reports or get Facebook raw data using Google Install Referrer.

Facebook’s proposed solution “Google Install Referrer” is only applicable to Android campaigns. It allows advertisers to enrich their Android raw data with campaign metadata. That’s appended to the Install Referrer in an encrypted format.

With the Google Install Referrer solution, you can link users’ in-app activity to their acquisition source for Android campaigns only. This is great as it allows you to measure the success of campaigns directly. By using your deeper level events as the case before any privacy changes.

However, you don’t get access to such data out of the box. You have to do 2 important steps;

How to prepare your app for it?

As you know by now, this change is affecting all MMPs without exceptions. So, the first step is to find out how your MMP is adapting to this change. And probably you will need to upgrade to the latest SDK for your MMP as it may be required.

The second step will be to set up your MMP. And give them your Facebook’s decryption key so that they can decrypt the data received from the Google Install Referrer. The setup will differ from one MMP to another, so you have to figure this out. Here is how to get that decryption key from Facebook:

Privacy is now more important than ever. Facebook, the company that was built and grown on top of its users’ data is now limiting access to user-level data and forcing advertisers to adapt.

This is a major challenge for startups and small businesses. As they have limited resources and heavily used or planned to use user-level data to find their way to the top. However, adapting has become a needed skill since the iOS14 rollout, and it’s time to use it.

Advertisers are being challenged with various changes in the ecosystem. But the only way to succeed is to adapt. And find an alternative in aggregate data to survive and to support the privacy-first advertising ecosystem.

That’s it for this one, see you in the next article. Ciao!