This article is about how to amplify your growth on Facebook Ads.

You can win +150% ROAS with this strategy on Facebook!

With some simple settings, you can easily win a lot on your performance marketing strategy. Just follow some common strategies known in the marketing industry which I will try to explain and prove with facts below.

Setting your campaigns up country by country

The easy assumption is that if you go for one country targeting strategy it would be easier to:

I tend to agree with that statement, depending on our clients’ goals. On one hand, it is true that you have more control over your spending but on the other hand that does not necessarily mean that you will achieve better results.

Let’s assume your website or app doesn’t care where users are based as long as they make some purchase. You do not have a local community or marketplace model or some restrictions to offer your service outside your main target country, let’s say the US. How much does it really matter that your actual user resides in the US? As long as revenue rolls in, does it matter if it was from Ireland?

Our hypothesis is that there are millions of financially independent individuals out there that speak English, French or whatever who might be interested in your products but you ignored them because your thought was, the best users are from the United States. Well, after so many years in advertising I can tell you Algorithms of Facebook or Google need food and they need a lot of it.

A general rule of thumb for me was always: if an addressable audience of an adset was 1 Million people, my campaign would succeed. Anything below was rather average or really bad. The extreme targeting possibilities on those platforms can lead to false decisions here as many believe they need to narrow the target audience as much as possible. Well, the opposite is true. At least it was true across the thousands of apps & websites that me and my colleagues at Admiral promoted so far.

The whole experiment ran from February 23rd to March 7th and we reached over 1 million people.

Firstly, we launched 6 app campaigns the traditional way, split by country and Operating System on Facebook targeting 3 countries (Canada, United Kingdom & United States), 3 campaigns targeted iOS and the other 3 went for Android. So, the 6 campaigns were:

We used the same amount of ad sets within each campaign, using the same event optimization, equal targeting, and lookalike audiences. We also included the same ads within each ad set and we run the campaigns for 7 days.

Let’s say this set of campaigns created our baseline to compare with the later tests of grouping countries.

We now launched two new campaigns with the same ad sets, ads, and event optimization but instead of using one country targeting strategy, we included a bunch of countries, 11 to be precise. They also ran for 7 days. So, these new campaigns were: 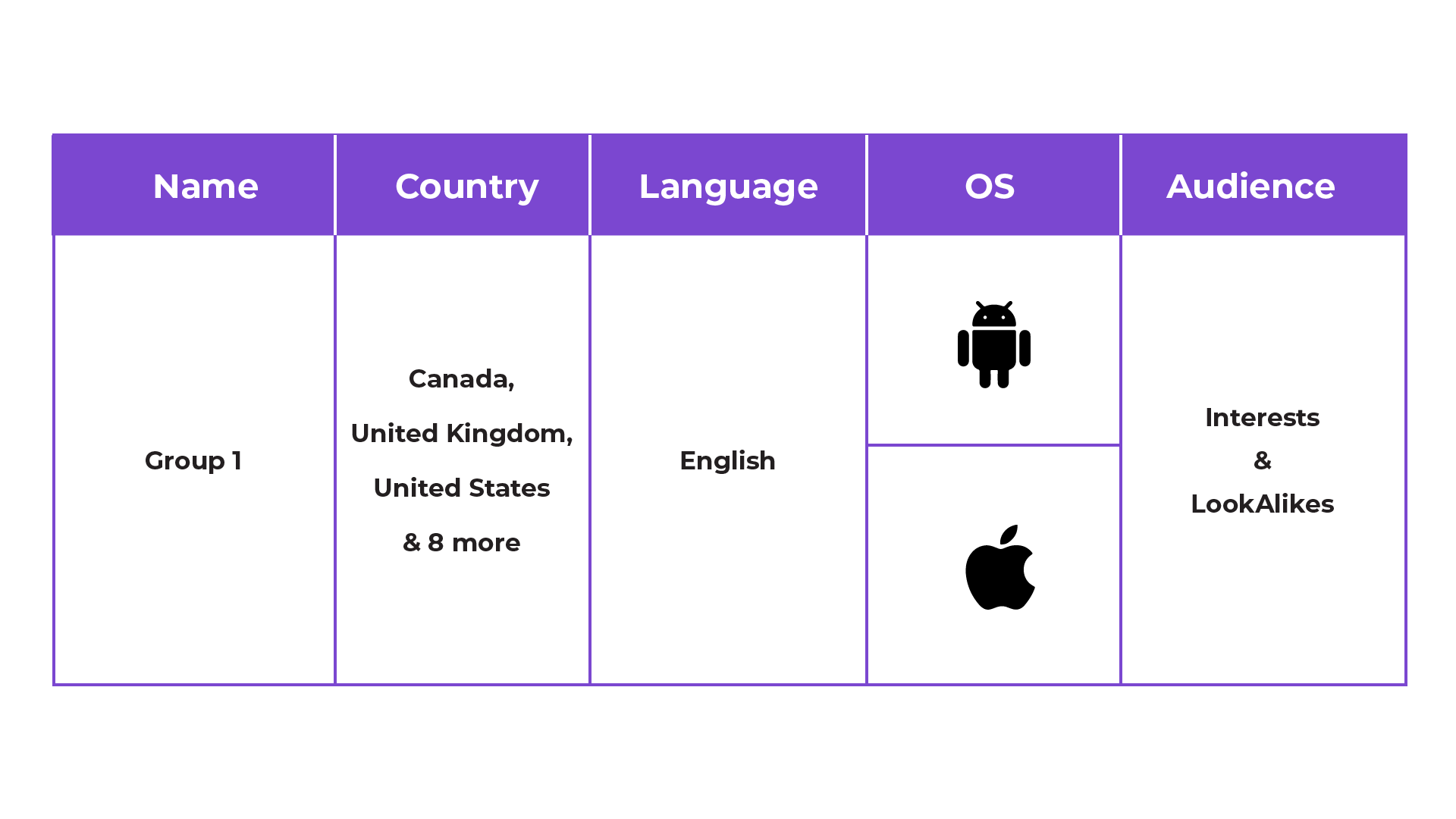 How many countries shall I include in each Group?

For app ads you can for example target “regions” on Facebook and select the actual AppStore regions but there is no magic number that will have a positive impact on results as it is not guaranteed and it will definitely depend on the audience size of your ad sets and the countries you target, but a number between 10 and 20 seems to be reasonable. Your daily budget certainly also defines how much you want to spend per country, in the end, to really prove statistical significance.

Less than 10 countries probably won’t give the system too many options to test though and in case you include more than 20, some countries will likely spend too little money and this will miss-lead the algorithm as it will take too long to gather enough data to optimize positively in those countries.

As we can see in the below table, we analyzed each segment separately and tried to pick a winner (in green) taking a look at the KPIs differences in percentage. We compared CPI, CPP, and ROAS differences between the two segments for the 3 countries and the 2 operative systems. 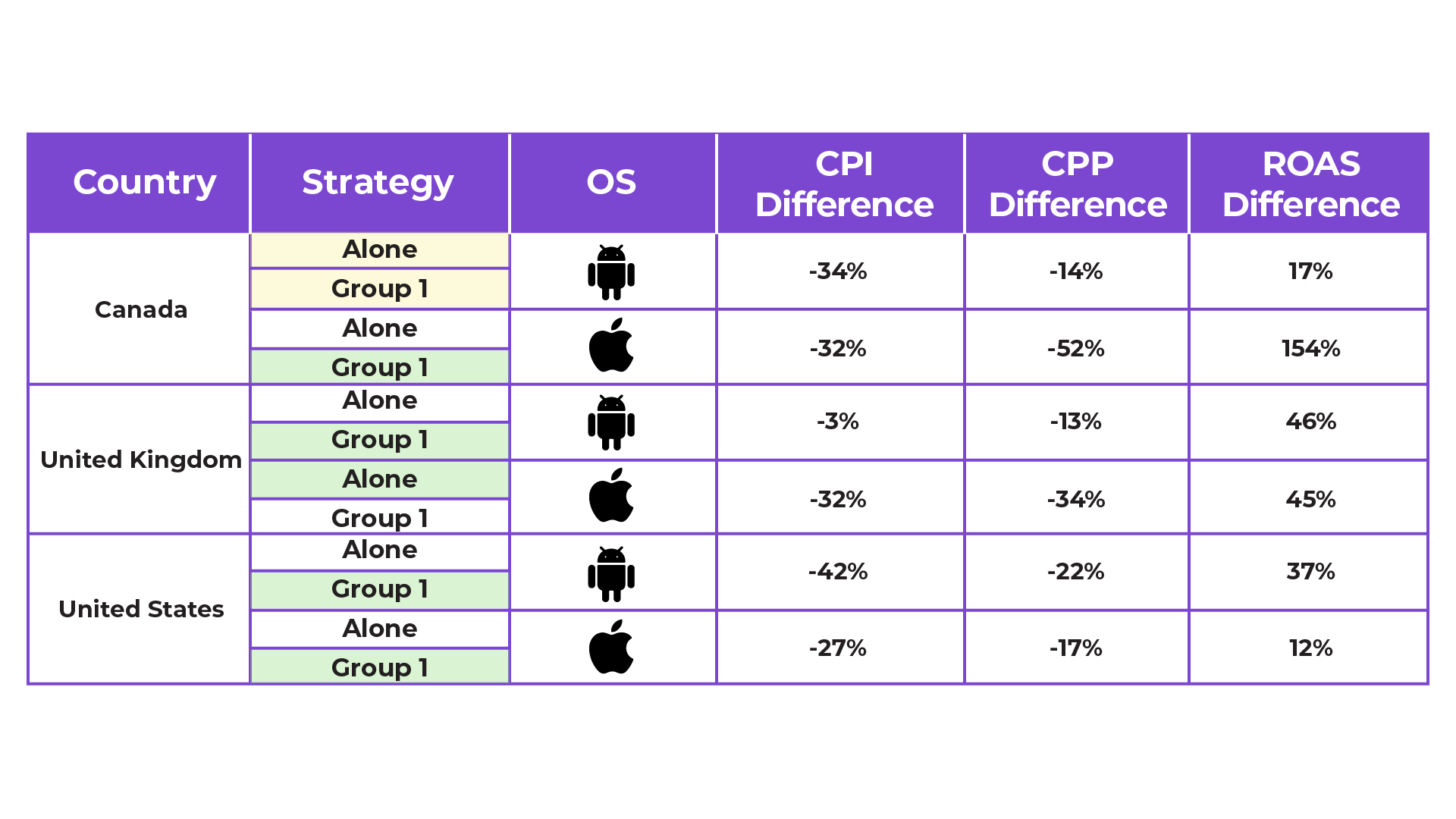 Canada_AND: It is hard to pick a winner here as the CPI & CPP prize goes for Group1 (CPI was 34% cheaper and CPP 14% lower). However, when targeting Canada alone, we obtained a 17% higher ROAS. As this last metric is more important at the end of the day, we will favor the Alone strategy. 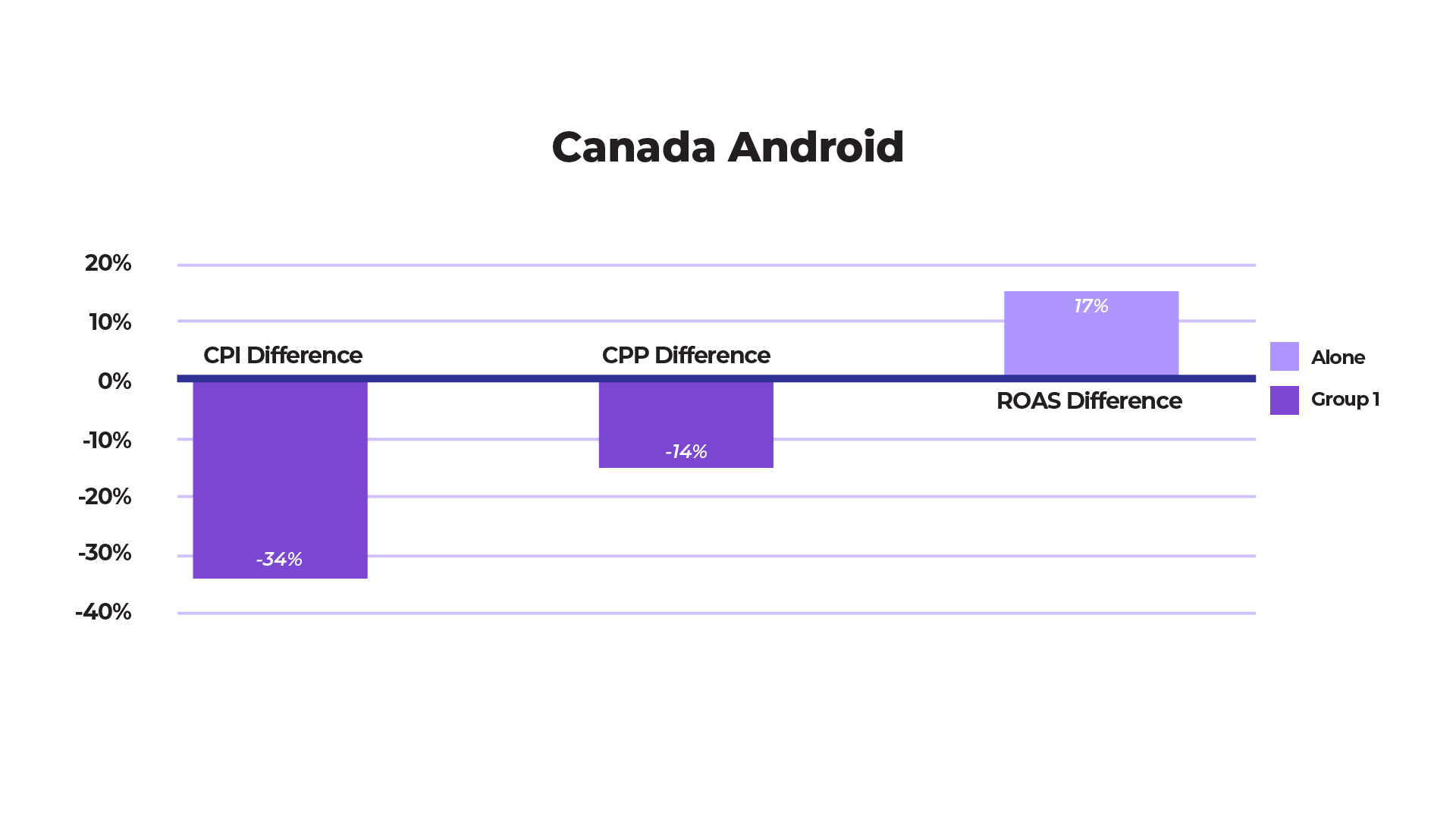 Canada_IOS: Group1 is a clear defeater. 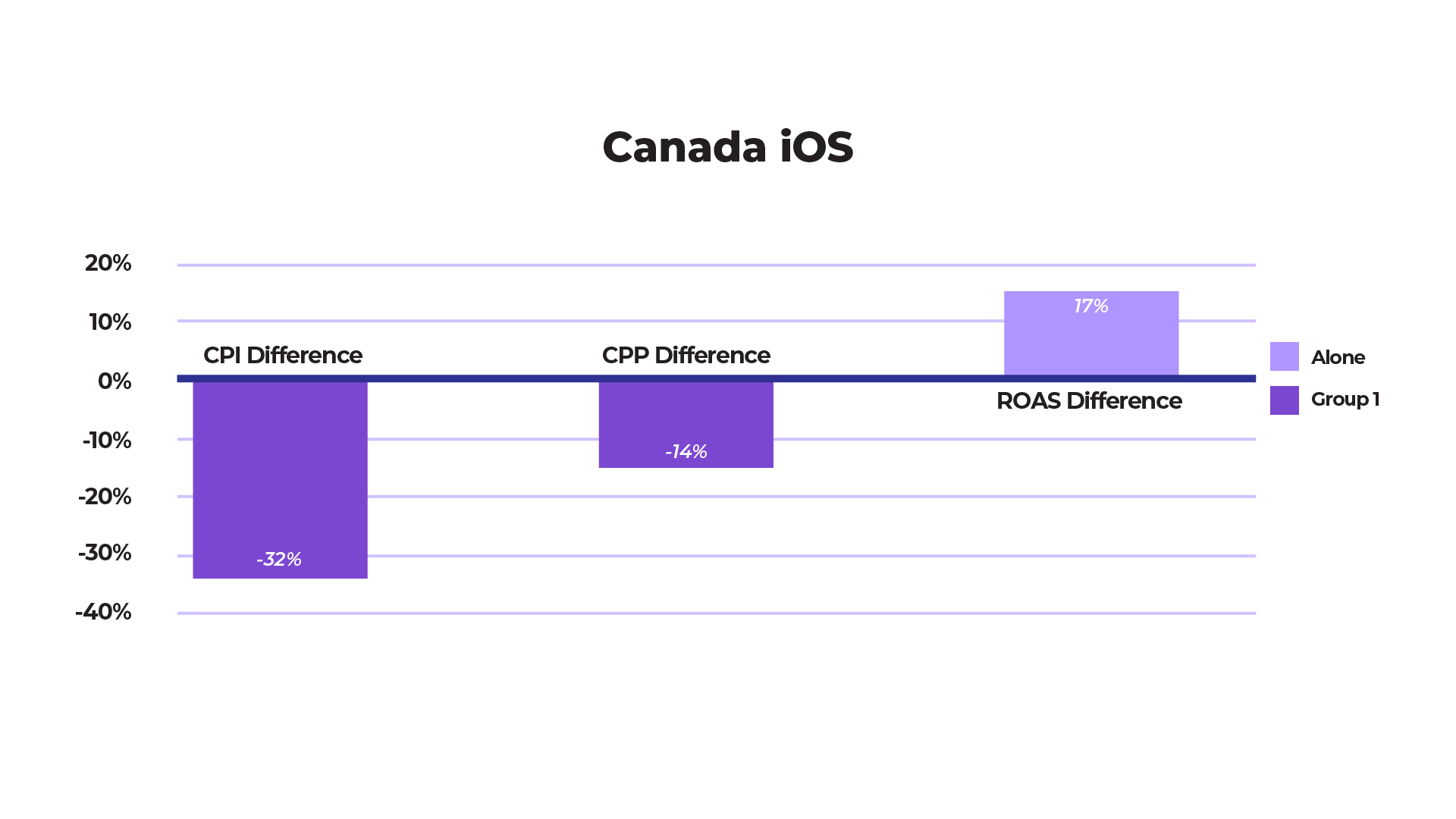 United Kingdom_AND: CPI was slightly better for Alone targeting, however, CPP & ROAS were clearly in favor of Group1. 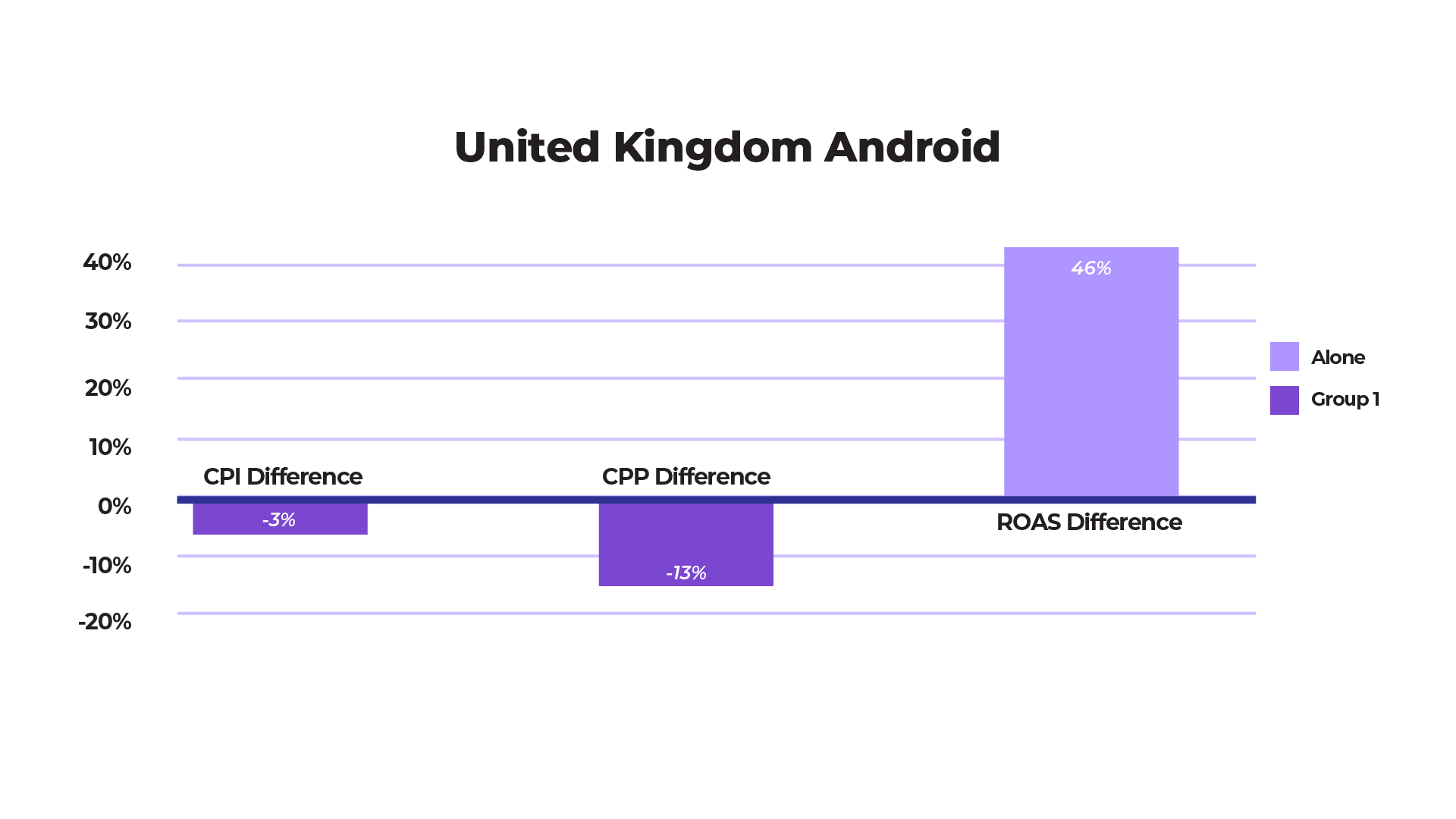 The champion is an alone targeting strategy – United Kingdom_IOS: 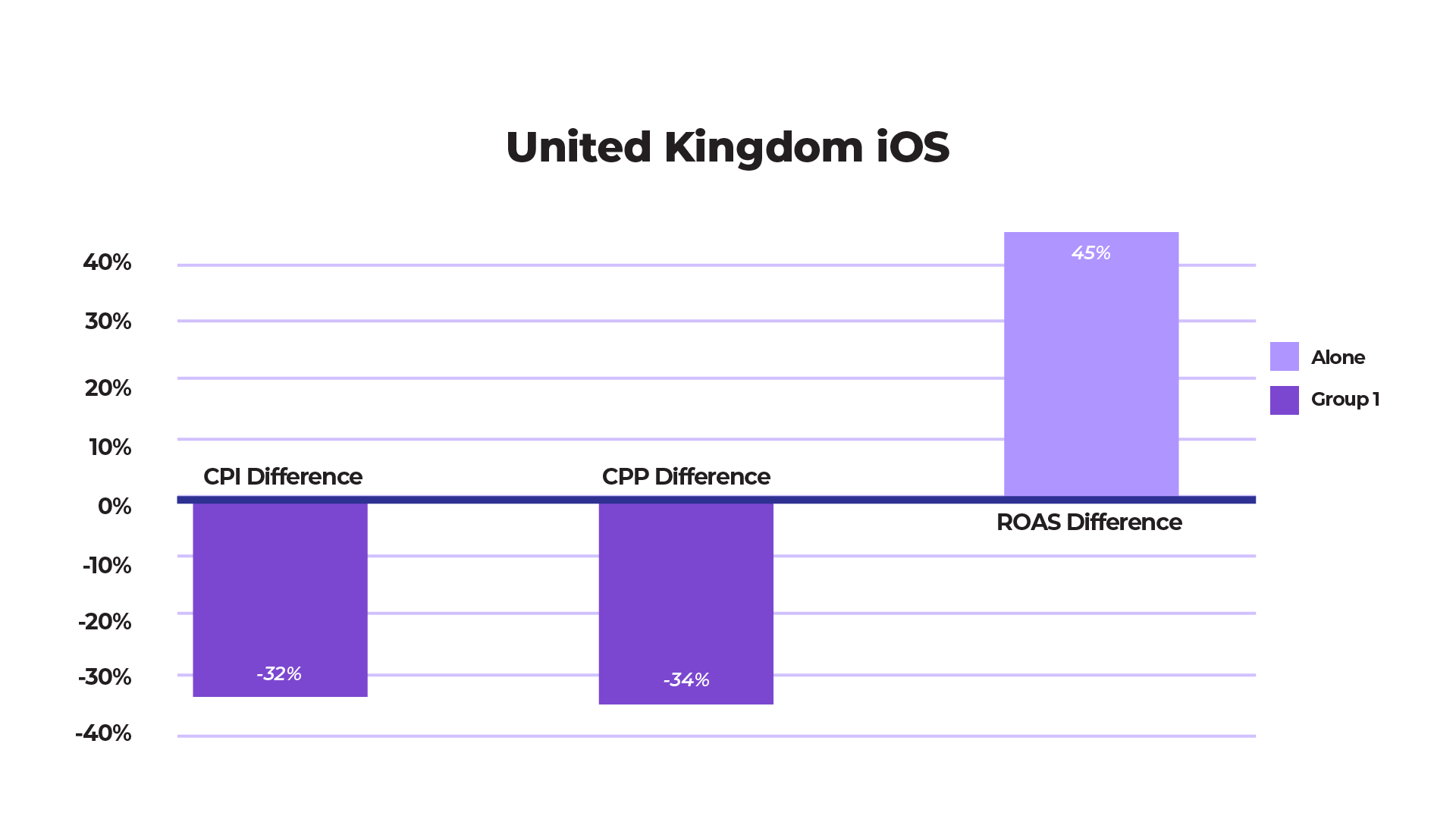 United States_AND: The price winner is once again Group1. 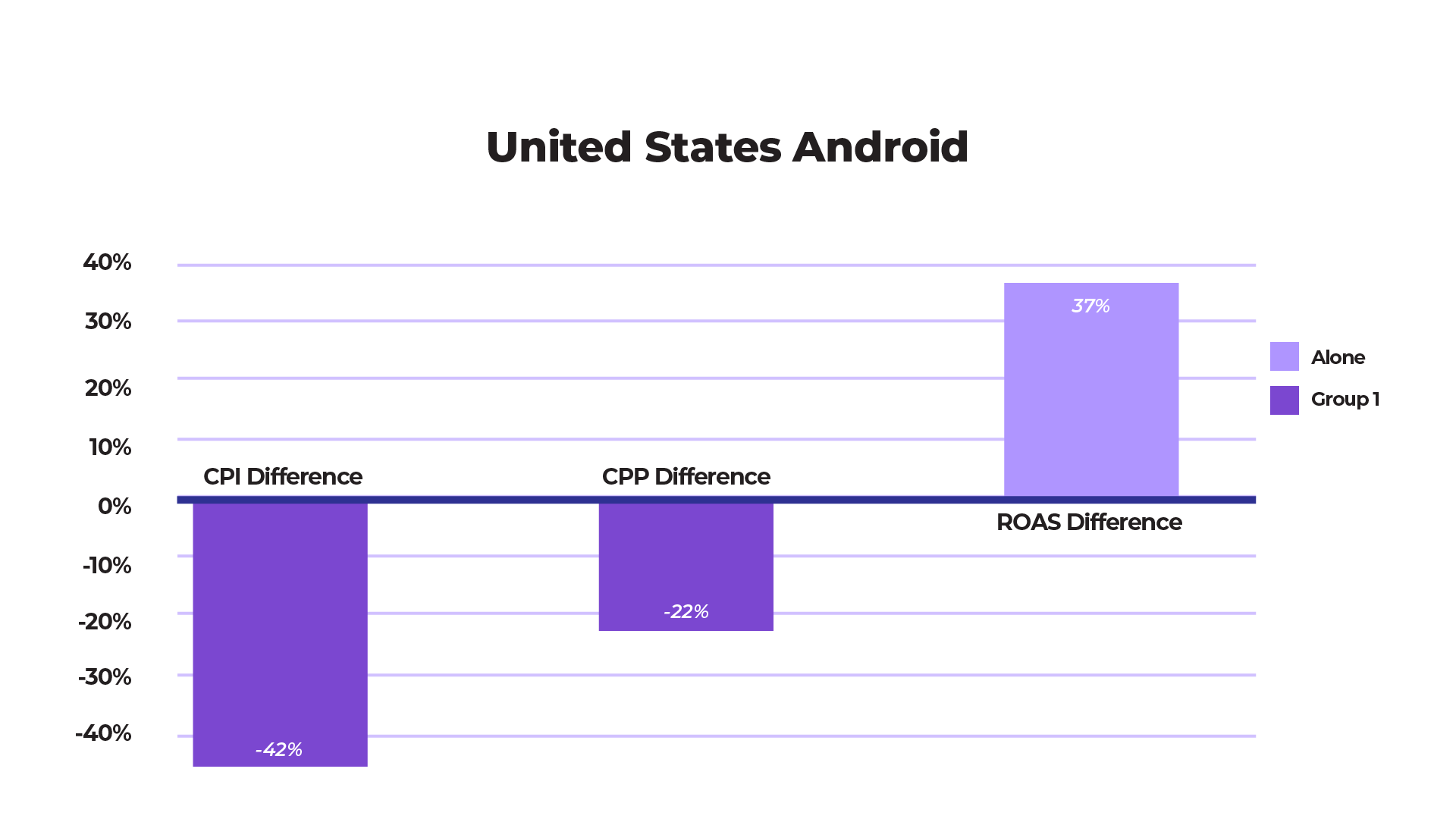 United States_IOS: Once more, the award goes to Group1. 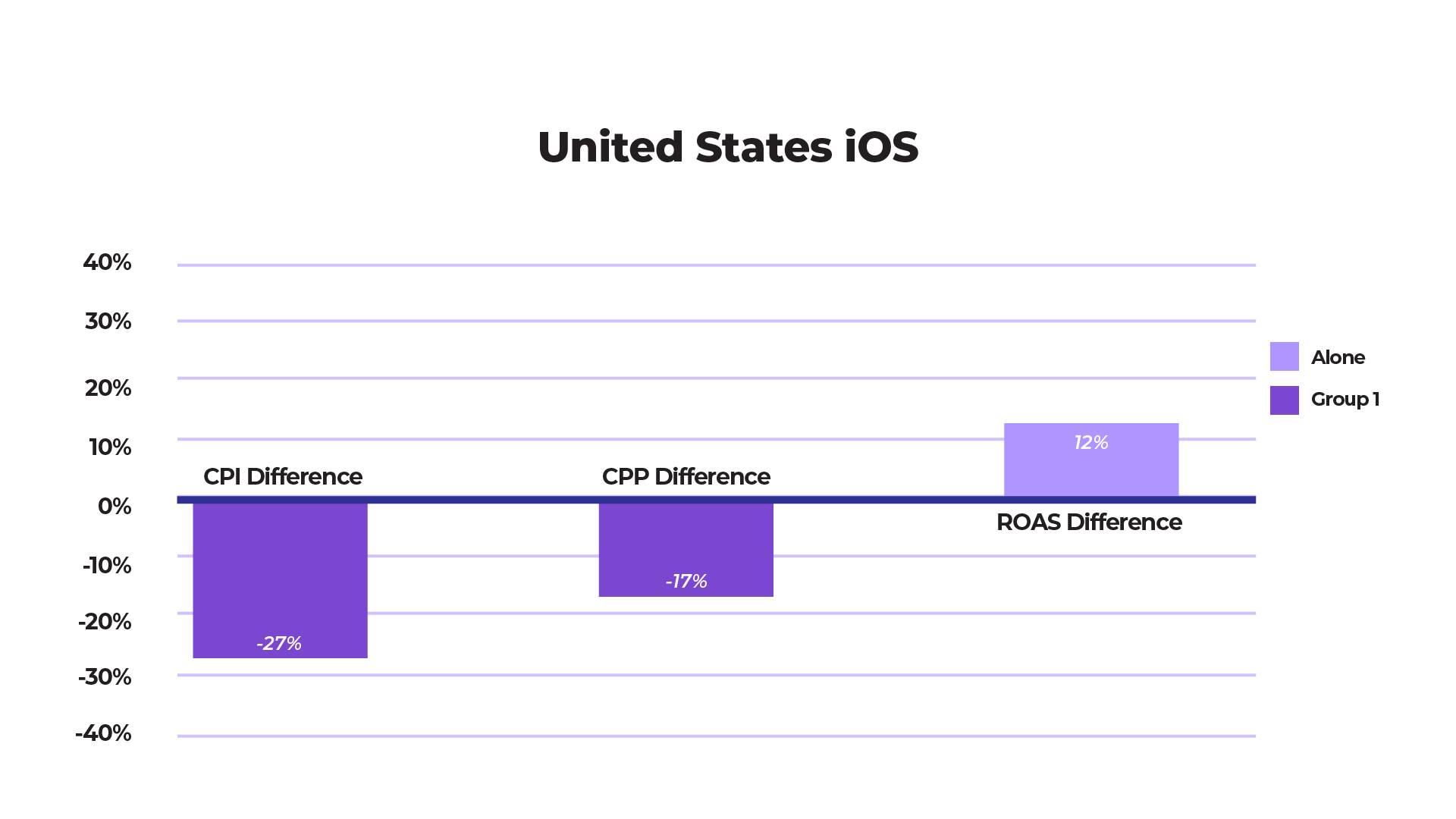 Note: These 3 countries drove 85% of the total spend in the Group1 campaigns.

What happened with other countries?

CPI difference was clearly on Other countries’ side, however, CPP & ROAS analysis makes it more complicated to pick a winner. Android drove better results in CA, GB & US campaigns but iOS was completely the opposite. The hypothesis for such results is that the lower competition in Other countries got lower CPIs & CPMs. Nevertheless, iOS users in CA, GB & US were harder to be persuaded purchase-wise, leading to a higher CPP & lower ROAS. 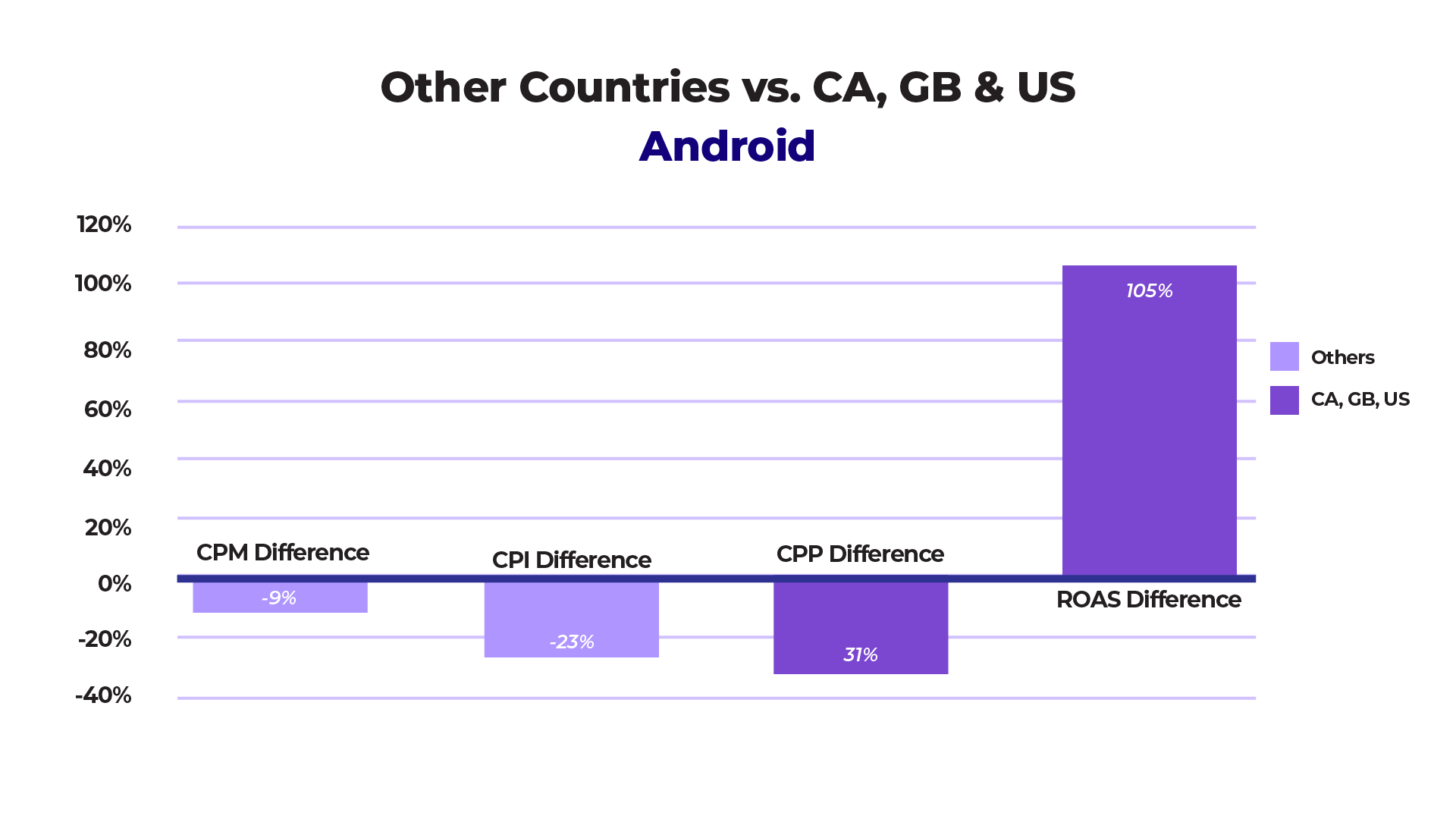 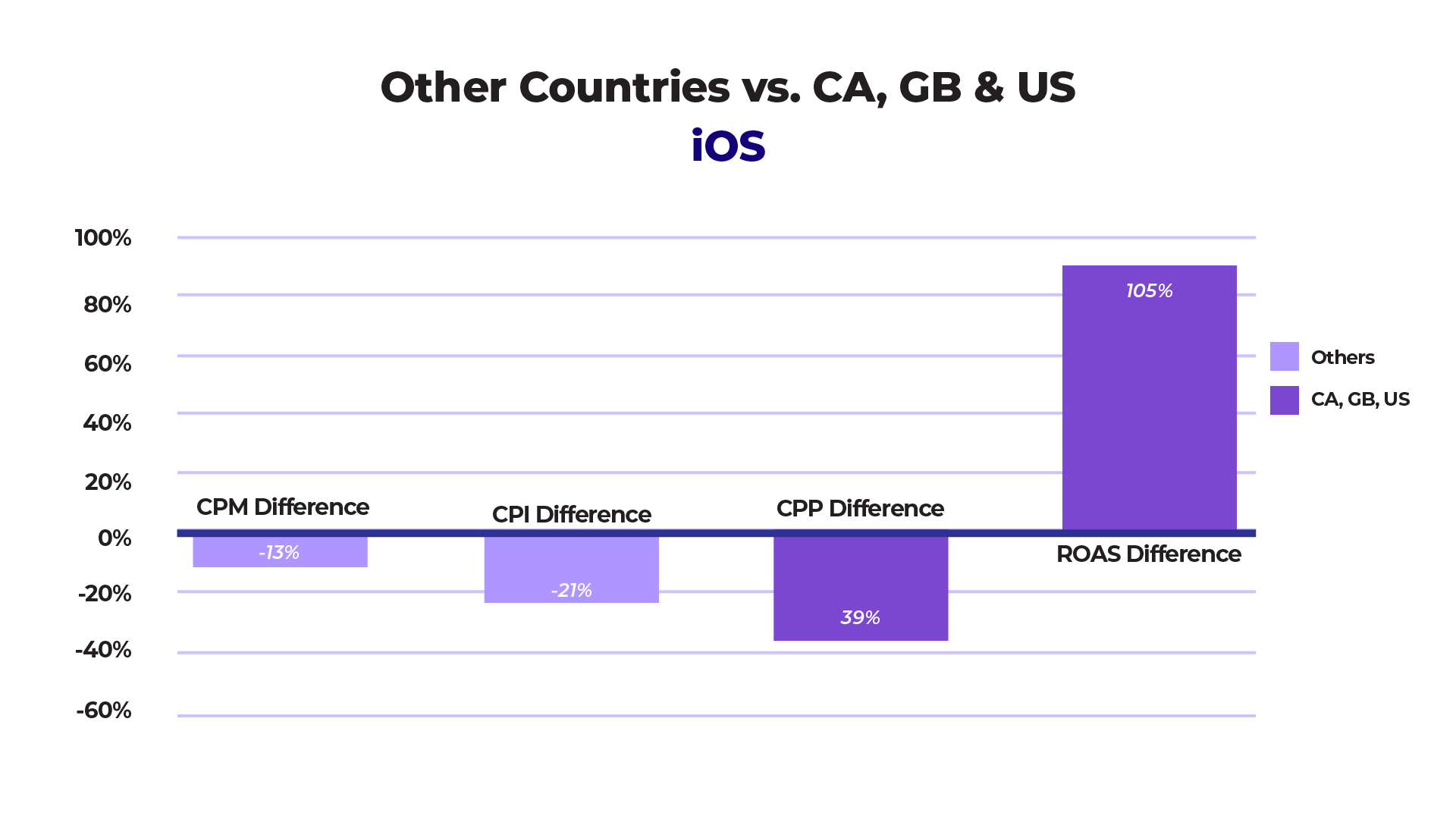 What you can learn from this Case Study

Our overall conclusion is that grouping countries in the same ad set is beneficial to get better KPIs, however as we also see that in some specific cases, the Alone (only one country) targeting strategy was the defeater, we highly recommend you to run your own tests and take your conclusions. We will be happy to hear your recommendations as well!!

Why grouping countries seem to be positive?

Our assumption is that the key for much better results in some cases is that the algorithm can take advantage of cheaper KPIs (especially CPI) in those countries with lower competition at a given moment. Let me try to explain this a little better: Let’s say you have 5 competitors on your auction per country targeting a similar audience, but one of them suddenly stops promoting its app/website in one of the countries. At this moment the auction gets cheaper and Facebook obviously knows that and can fill the space with your ad. You benefit from cheaper CPMs and can convert a user. This leads to overall better performance as our campaigns’ bidding decreases, getting also cheaper Installs in the good countries.

That’s it for now, stay tuned for our next article!