Skip to content
Home » Why A/B testing on TikTok is wasting your money?

Why A/B testing on TikTok is wasting your money?

What is A/B Testing?

A/B testing is a simple way of determining which version of some marketing content performs better. (It’s also sometimes  known as split testing or multivariate testing.) It is the method of optimizing digital marketing campaigns by comparing two different versions of the same campaign to see which variation performs better for a certain conversion goal. Let’s say you are sending out an email promoting your new product, and you want to see which subject line will get more people to open it. You could send one version with “New Product Alert” as the subject line and another with “Check Out Our New Product.” After sending both campaigns out to your target audience, you can use A/B testing to determine which one performed better in terms of open rate, click-through rate, and conversion rate.

To make sure you’re on the right path to success, there are a few things you need to do! When you’re planning your test, it’s important to be clear about your goals. Do you want more clicks? More purchases? A better brand image? It all depends on what you want to achieve and what you can measure. When you know which metrics you want to optimize for, it should be easy to set up a test that confirms the results of your ads—and leads to the best possible outcome for your business. If you have a marketing funnel in place, it can also be a good idea to track metrics at each stage of the funnel. Because these will help you identify where any bottlenecks may be occurring in the user journey from awareness to conversion. You can also compare end-of-funnel conversions with the paid media costs allocated for each step of the funnel and determine if your campaign is meeting budget targets.

Remember: A/B testing allows for multiple iterations based on performance data that continually informs your strategy about what’s working and what isn’t. If you haven’t run a lot of ad campaigns before, A/B testing will take out the guesswork and help you understand your audience.

If you’re a social media marketer, it goes without saying that Facebook is your bread and butter. But why?

You may be wondering why you would want to test on Facebook instead of other platforms like Twitter or Instagram, but the answer is simple: Facebook has a lot of traffic, which means you have many opportunities to test your campaign and figure out what works best for your brand. It also means that you can take the most successful aspects of your campaign on Facebook and deploy them across other platforms with confidence. Facebook also has its own A/B testing tool, with which you can experiment before going all-in with what performs well in an ad campaign. This allows you to test different versions of your ad so that when it finally goes live, it will perform as well as possible (and bring in more sales or conversions).

A/B testing isn’t just about ad creatives, as there are many more things you can test. On Facebook, there are five different variables you can use for testing: audience, creative, placements, delivery optimization, product set, and ‘more than one (for testing multiple variables), all of which can be managed from the ‘Ad Set’ tab in Facebook Ads Manager. 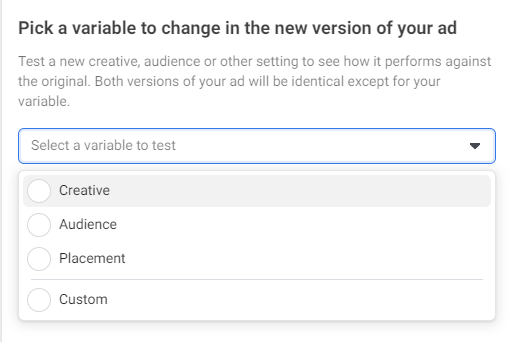 Once you’ve decided on your test type, you’re ready to get started! You can decide how long you want your test to be in the Ads Manager. And track progress in the ‘Account Overview’ tab.

Is A/B testing different on TikTok?

A/B testing on TikTok is different from testing on Facebook or any other kind of platform, mainly because it is so demanding in terms of creatives. Creatives need to be refreshed on TikTok consistently so that TikTok won’t suspend ad spending. Due to the ephemeral nature of TikTok, ads experience burnout much quicker than on other channels. TikTok recommends advertisers don’t use a specific creative for over one week, and you should be aiming to create at least five different creatives under each ad group to prevent ad fatigue. Ads can run for a relatively long time on Facebook. Once you have engaged with your audience and found a creative that works. Whereas on TikTok you will need to refresh creatives to keep up with new trends.

Another major difference between testing on Facebook and testing on TikTok is metrics. Facebook has a lot more metrics than TikTok. On Facebook, there are over 25 metrics you can use to measure your ads’ results. Including age, gender, location, and more. However, on TikTok you only have 3 key metrics: impressions, clicks, and conversions. These numbers will be used to determine how well your ad performed by comparing the content of the ad with its audience’s response. TikTok is a new platform in the social media world and still growing quickly every day. It has already surpassed 1 billion downloads. It can not yet provide as much detailed analytics as companies like Facebook have been able to offer their users since they were first launched years ago.

What makes A/B testing so difficult on TikTok?

TikTok isn’t the ideal platform for A/B testing. TikTok’s users are always looking for something new, and the kinds of content they like change rapidly. This means that a creative that performs well for a week can tank the very next week. And creatives that performed poorly for one week can suddenly strike gold. There are a few tactics you can employ to help you keep up with trends and refresh your creatives.

You have to be quick & nimble. You have to be able to keep up with trends and refresh your creatives as quickly as possible. So you can take advantage of what’s going on in pop culture at any given moment. Besides that, you have to constantly experiment and A/B test your content. And it has to happen at a breakneck pace.

How do you create an A/B test on Facebook ads?

A/B testing is a great way to optimize your Facebook ads. It helps you find out which ad versions get more clicks, leads,and sales from your audience. In a nutshell, The "A" ad is your control or base ad that contains the rule of thumb. The "B" ad changes one variable by adding or subtracting one element from the creative or copy to test out whether it will improve performance.

Here's how you do it: Create two different versions of your ad (called "variations"). Make changes in the copy and creative to test which one performs best with your audience. Then, when people see your ads in the news feed, they’ll be randomly shown each variation so that Facebook can track which one works better. To set up the test, select the Facebook ad campaign that you want to test. Click the "Conversions" tab at the top of the left-hand menu of your campaign. Click the drop-down menu next to "Budget" and choose the objective you want to compare your costs against. For example, if you're interested in seeing whether adding an image boosts impressions or clicks over another version of your ad that doesn't have any images, then choose "Clicks."

How do you do a split test on TikTok?

If you have a hypothesis that one creative will perform better than the other, Split Test is a quick and precise way to compare strategies, measure changes in performance, and scale your spend for the best return. You can use Split Test with TikTok by testing targeting, bidding, and optimization for two or more ad groups.

Choose how long you want to test for and ensure it’s enough time to develop conclusive results. This experiment will only run for the period selected. After that, your ad automatically stops running. Once you’ve used the Split Test tool to split your audience into equal groups, you can effectively draw a statistical conclusion about your ad performance.

How do you create an A/B test on TikTok ads?

TikTok ads allow you to create two different advertisements that are A/B tested for performance. In order to create an A/B test, you need to first choose your ad type, location, time, and budget for your campaign. Once this has been confirmed, you can then select your ad set and create the two ads that you'll be testing against each other. For example, you can run the same video content with a different copy (captions) and see what resonates more or you could try different video types. To get a well-rounded set of results, you might want to run several tests to get as much data as possible.