Skip to content
Home » To MMP or not to MMP? Mobile Attribution after iOS14

To MMP or not to MMP? Mobile Attribution after iOS14

What is an MMP (Mobile Measurement Partner)?

A mobile measurement partner or MMP is a tool that helps app businesses measure the performance of their advertising campaigns from every angle. In short, it attributes a newly acquired user to an ad channel, campaign, and beyond.

This works very easily as follows:

This may sound confusing because MMPs are promoted as the one trusted source of truth while in the steps above, it seems like they just do attribution based on claims received from the ad channel. While this is true, they still do some work in the background and sometimes a claim doesn’t really take effect, which is why you can see a discrepancy between the ad channel’s data and the MMP’s data.

In addition to that, MMPs help in a couple of other tasks:

How does iOS14 affect MMPs?

Let’s compare how MMPs work before and after iOS14 changes, as this is important to understand the effects of iOS14 on MMPs. Before iOS14, MMPs were able to obtain the user’s IDFA to be used in the attribution process. Here is how the process looked like: After iOS14, IDFA access isn’t accessible without the user’s consent, and above that comes the SKAdNetwork framework that controls the data processing. That means that both the MMP and the ad channel will get their data from one source, SKAdNetwork. Here is how the new process looks like: 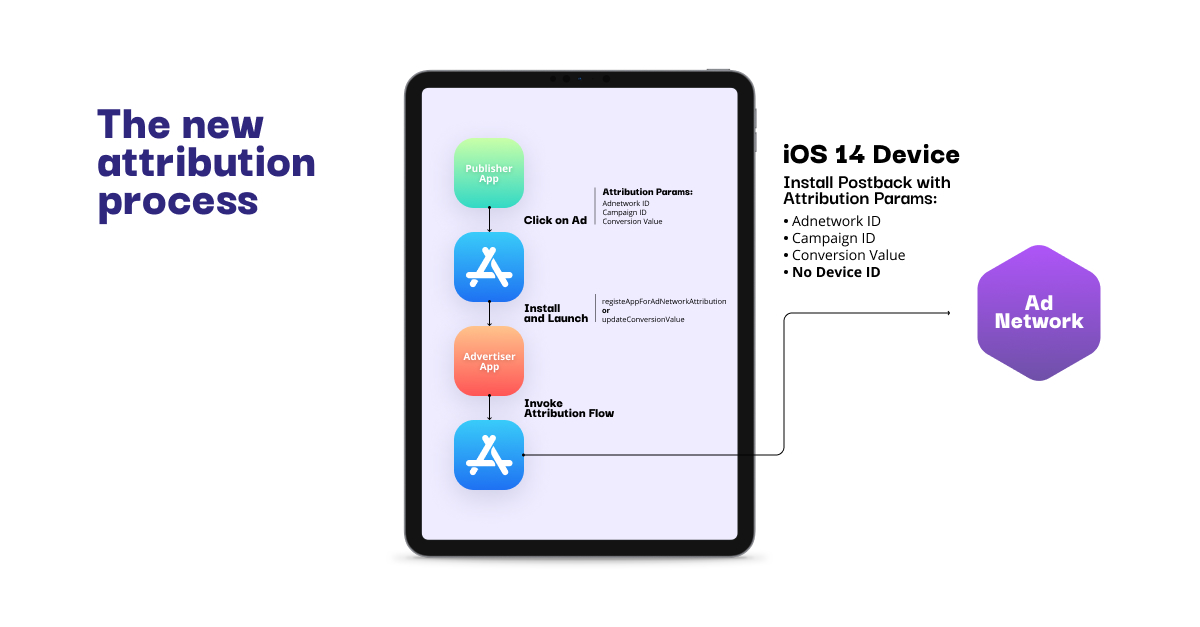 This means that the SKAdNetwork framework became the leading method for mobile measurement on iOS. That’s because Apple wants it so, and it’s actually a privacy-first framework, unlike MMPs.
Also, with iOS15, Apple gave some power back to advertisers and away from networks and MMP when it decided to share SKAdNetwork postbacks with advertisers directly. Does this set MMPs as useless tools? The short answer is, not really.

The SKAdNetwork is definitely changing the whole ecosystem from being all about user-level data to privacy-first. This means that advertisers won’t have user-level cohort analysis anymore and will have to adapt to limited attribution ability. However, MMPs are attempting to find solutions to maintain the need for user-level data, which was always used until today to measure success in mobile marketing. In fact, MMPs are using fingerprinting to preserve a level of user-level attribution system. But how does it work?

Fingerprinting was always an alternative method for matching a click or an impression with an app install. It uses things like IP address, device type, and other metadata about a user’s device to make attribution. Hint, this is actually being used at the moment if a user didn’t consent to the ATT prompt. This method works well but is not as accurate as it’s being promoted. However, MMPs are continuously working on enhancing this method by improving the machine learning algorithms used in such a process.

However, Apple – “la policia” of the iOS system – is watching in silence and didn’t make any announcements yet. Actually, this fingerprinting/probabilistic matching method isn’t bad from a privacy standpoint. It’s likely that Apple won’t push businesses more than this to keep room for other businesses to grow which will impact Apple’s growth.

But, it has some limitations such as fraud risk, may not prevent duplication in reporting from other networks, not a really accurate method, and of course, there is no clear statement from Apple on using this method for attribution.

MMPs have been so much affected by iOS 14. In fact, Apple hit them hard, but they are still useful. They help in unifying your data in one place. Also, cutting the engineering team from most of the process saves you and your team time. They help send/map events with whatever channel you want to test for user acquisition. Also, they do some other cool stuff like fraud detection and prevention. In addition to that, they keep developing and researching new methods to benefit the advertiser and survive. Such as in the case of fingerprinting/probabilistic attribution.

For more interesting insights, check out our latest articles!